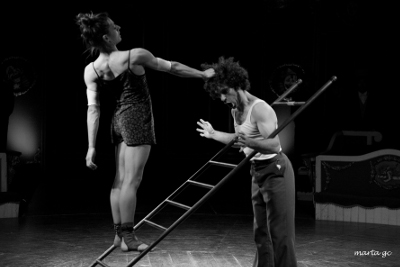 Hotel iocandi was born at the beginning of 2012, when Tomeu Amer and Griselda Juncà met after having finished their training period at the Circus School Rogelio Rivel and after having undertaken other projects (Tomeu with the company Trifaldó and Griselda finishing her training in fixed trapeze at The Circus Space in London).

From this first meeting, the short piece Esquerdes was born and it was selected by the project Camins Emergents 2013-2014. With this piece, they have performed in several festivals of Catalonia, Spain, France and Italy (Trapezi Reus, MAC Arts de Carrer, Européenne de cirque de Toulouse, Bilboko Kalealdia, Curtcirckit, Kaldearte Vitoria, Festival Brocante, Mercat de les Flors… among others).

At the beginning of 2013, the singer Joana Gomila joined the project and the three of them undertook the creation of the long version of Esquerdes, premiered in October 2014 at the Festival Escena Poblenou in Barcelona. 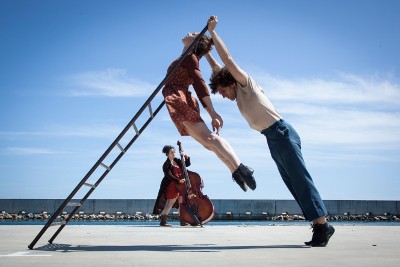 “What is in the empty space between two pieces that do not fit? A man and a woman meet in a place. He climbs. She runs. Just a simple movement… and the game can start.”

Esquerdes is a short piece that combines static trapeze and acrobatic ladder through two moving bodies, in a game between the desire and the escape. END_OF_DOCUMENT_TOKEN_TO_BE_REPLACED 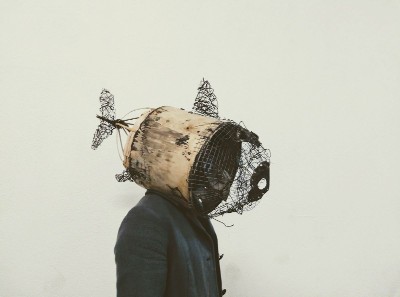 Second production of this company that presents a solo of small-medium format based on the circus and the clown. A reflection, from the poetic of the absurd on the impact of tourism, on the struggle of powers, on the emptiness, the silence and the loneliness in front of the immensity. A metaphorical trip to the human depths to look for what makes us continue swimming, looking, paddling despite the unforeseeable and always amazing magnitude and force of the waves.  END_OF_DOCUMENT_TOKEN_TO_BE_REPLACED