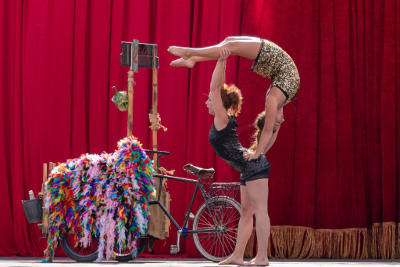 Las Sistars is an italocatalan company born from a casual friendship. Curiosity and a great stage chemistry brought us to work together after taking a two-year formation at Escola Rogelio Rivel together. Hand to hand discipline allowed us to enjoy the circus and play with our bodies, always trying to find different ways of communication.
Currently we are at the end of our first piece, where the circus coats itself in the absurdity and spitting gum becomes a risk sport. So far, we have worked around Catalonia and Italy with our
small format show and now we want to introduce our first long creation “Dai, ma aspetta”.

JUDIT OBACH – Direction and performer
Born in Santa Maria de Palautordera (Barcelona), she graduated in Philosophy in Universitat de Barcelona in 2012. Having always had a big curiosity for the performingarts, she enrolled in performative courses in Col.legi del Teatre (Barcelona), contemporary dance at Rosita Mauri School (Barcelona) and Dance Centrum Jette (Brussels).
Finally she became a circus artist at Circ Rogelio Rivel and specialized on hand to hand discipline. Currently, she is the cofounder of Las Sistars company where she created her first piece of medium format “Dai, ma aspetta”. At the same time, she works as a performer for the French company Portés de femmes with who she participated in international  festivals as Festival Mondial du Cirque de Demain.

MADDALENA CHIALDA – Direction and performer
Born in Varese, Italy. From a very young age she began to practise artistic gymnastics and never abandoned it, while she finished her upper high school studies in socio-psico pedagogical studies in Liceo. When she turned 21, she enrolled in new studies at Atelier teatro Fisico Philip Radice where she
discovered both the scenic arts, dancing, theatre and singing. After this two year course she decided to continue at Escola d’Arts at Circ Rogelio Rivel. There is where she specialized on verticals mixing that technique with dance and contortion, while she works with the collective of acrobatics. Her formations is nurtured by workshops with teachers like Pascal Angelier, Roberto Magro, Pau Portabella and Christian Coumin.
Currently she lives in Barcelona where she works with Las Sistars company, being one of the cofounders and continuously forming herself with vertical and dancing classes. 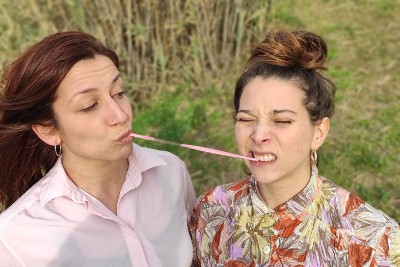 Two women, two chairs and a piece of gum.
The hand- to-hand acrobats will undergo an absurd but poetic journey born from dead time.
When we wait, does time become void? What happens when we are waiting?