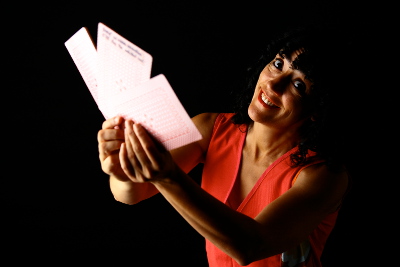 She is an artist with a great diversity of artistic education, such as acrobatic techniques and tightrope walker in the Escola Timbal, pantomime with Cristian Anastasio in the Escola Fàbrica, acrobatics with Rogelio Rivel (Charlie Rivel’s brother), Chinese opera with Ling yuan-Shang, art comedy with the Director Carlo Bosso in Pitigliano (Italy), magic with Grup Fils and Aleix Badet, illusionism in the Spanish Society of Illusionism (in which she is also a partner), Theatre of the Oppressed with Augusto Boal and Andreu Carandell and puppet shows in the Theatre College of Barcelona.
She has always been in contact with magic and created a show based on comedy magic called “Xicana” in 1993, and it became her passion and main base of her shows in 2007. She got specialized in close-up magic with Gabi Pareras and has participated in the Festival of Magician Women in Terrassa, Festival of the Scenic Arts AMA in Palma de Mallorca, the Women Clowns of Andorra, also a Close-up Magic Congress near Alacant, and the 3rd Meeting of magic for children in Alcoy (Alicante), the Magic Festival of Santa Susanna, the Impossible Festival on Magic of the Canonge, the Festival street arts in Viladecans, in Magiclown, Festiclown and others. 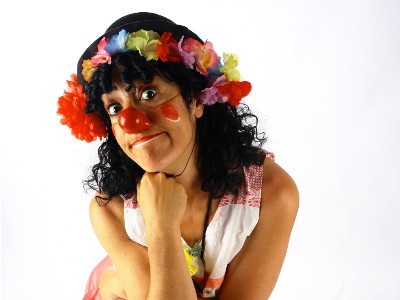 Xicana is a clown woman who wants to do magic, but she always fails. She sells the magic when there isn’t any of it, and when there is magic she does not know to do it.
Xicana has performed all over the world for more than twenty years on stage. END_OF_DOCUMENT_TOKEN_TO_BE_REPLACED