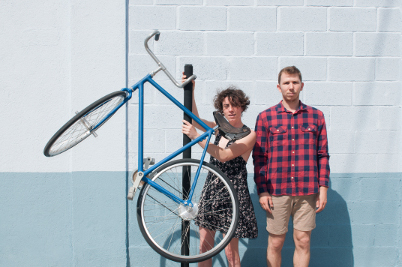 Eva and Joan get to know each other at the circus school Rogelio Rivel of Barcelona.
After finishing their training they decide to create their own company. Both of them specialize
in chinese pole and together they have developed their own language.
Qui cu qui què quina is their first show with a world full of buttons and wires that provoke
unthinkable short-circuits and connections.

EVA CAMPS
After an initial year of training in contemporary and classical dance, jazz and hip-hop she decides to take the leap into the world of circus. Besides the chinese pole she also performs as a flyer on top of her catcher who’s steering an acrobatic bicycle.
She also works as an acrobat in the show Iter 2.0. of the company Infra·poètic·circ, as well as with the cia. Faltan7 in their show Express.
Moreover she is a circus trainer and collaborates actively with the Associació de les Arts del Circ Cronopis.

JOAN PALLÀS
Since his early childhood he was told that they should bring him to the circus, but it’s only after having completed a degree in Advertising and Public Relations that he starts his circus training. In spite of his unconditional love towards the chinese pole, he is also a catcher mounted on a bicycle.
He habitually collaborates with the company Planeta Trampolí and he is also a performer of the show Express of cia. Faltan7. He also works as a circus trainer for kids and adults and collaborates actively with the Associació de les Arts del Circ Cronopis. 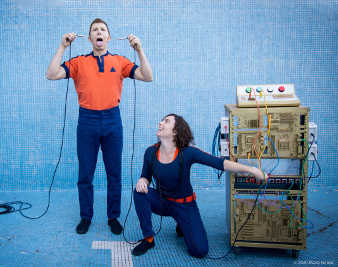 All living bodies have electricity. What happens if they connect with each other?
They get entangled in wires, climb up a pole and draw circles on a bicycle. Their mutual understanding will lead them to discover new worlds amidst the melody that sounds when two persons are connected.
Qui cu qui què quina is an adventure looking for a new way to relate. A game of connections between the artists, a machine and the audience.